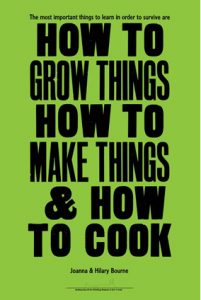 Graphic designer Anthony Burrill created a letterpress print for the Museum inspired by our founders’ motto that ‘the most important things to learn in order to survive are how to grow things, how to make things and how to cook.’ We talked to Anthony about his work.

The founders of Ditchling Museum of Arts + Craft, Joanna and Hilary Bourne, were born in India and first came to Ditchling as children. Their mother made a home for them here; they both grew up in Ditchling’s creative environment. Hilary Bourne learnt to weave in Palestine and became an accomplished weaver. Joanna Bourne read French at Oxford University and both sisters later taught at North End House School, which they had both attended as children.

The sisters’ great nieces, Lucie Broadbent Smith and Liz Pope, recall that as children, Joanna and Hilary told them that ‘the most important things to learn in order to survive are how to grow things, how to make things and how to cook.’

We spoke to him to Anthony find out more about his work, inspired by the Bourne sisters:

What themes have you been exploring in your recent work?
My text posters produced in letterpress are part of a bigger manifesto; they are provocations to both challenge and amuse. Personally I am most engaged by work that invites me to look a little deeper, to find out new things and challenge me to explore new ideas. That’s what I have always tried to do with my own work.

Where does your inspiration come from?
I’ve recently been writing a list of sources of inspiration. So far the list includes my rubber stamp collection, the days of dial-up internet, all the enthusiastic people I have ever met, road signs from different countries and defunct technology. The list grows every day as I look for new ways to be inspired.

Do you draw inspiration from other artists and designers? If so, who?
Long ago when I was an art student I was fascinated by Pop Art; in particular David Hockney, Peter Blake, Eduardo Paolozzi and Richard Hamilton, all of whom had a graphic sensibility to their work that I was drawn to. I look outside the world of art and design for inspiration now – I’m inspired by everyday things and situations.

How involved are you in the printing process itself?
I work in letterpress at Adams of Rye and screen-print at Harvey Lloyd in Wadhurst. I’ve had long working relationships with both places and understand the processes involved in making a print. I think it’s important for an artist or designer to fully understand the process they are working with, that way you can explore and experiment.

How important is humour in your work?
Using humour is a great way of communicating with people, it breaks down barriers and connects instantly. I play with words and their meanings in my work; my aim is to engage with people and produce a spark in their minds. I like work that is witty rather than jokey – one-liners wear off very quickly. I prefer work that has a few layers of meaning.

What enticed you to take part in the Big Steam Print?
I love the theatrical craziness of it. It’s one thing having a mad idea, but it’s something else entirely to carry it out in such a spectacular fashion. The idea of using a huge steam engine to produce a print is hugely exciting. It draws attention to the letterpress printing process in a novel and hugely memorable way. Also, I’ve always wanted to stand on the foot plate of a moving steam engine!

Do you have a favourite colour?
I like all the colours, especially the bright ones.

The museum has commissioned Anthony Burrill to design a special poster, inspired by a quote from the museum’s founders Hilary and Joanna Bourne. Printed at Adams of Rye, the poster is now available to buy from our online shop in two colours.

Graphic artist, print-maker and designer Anthony Burrill is known for his persuasive, up-beat style of communication. 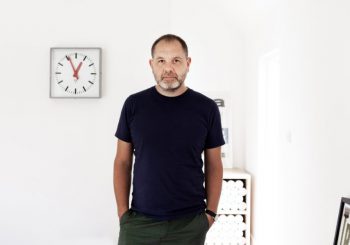 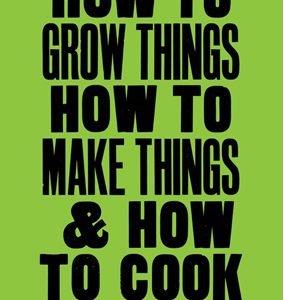