This spring, the once forgotten work of Brighton-born MacDonald (Max) Gill (1884 – 1947) will be celebrated at Ditchling Museum of Art + Craft. Max Gill, younger brother of Eric, was a well-known illustrator, letterer, map-maker, architect and decorative artist. His often humorous work, with its distinctive Art Deco flourishes and tones, charted the rise of new technologies such as electricity, flight and radio communication. Gill’s work was once prominently in the public eye, particularly his brightly-coloured pictorial maps, graphic designs for book covers, and posters for transport and communications companies in the first half of the twentieth century. His best-known piece, the large 1914 Wonderground Map, was hung at every London Underground station, and in 1917 he was appointed by the Imperial War Graves Commission to design the lettering used on the Cenotaph and every military headstone since WWI. It is therefore surprising that for many years his work faded from memory.

Gill’s work caught the eye of London Underground titan Frank Pick, who commissioned him to create promotional transport maps, including an early version of the London Underground system map (1922), London Underground Bus Services Map (1928), as well as Theatreland, Peter Pan Map and, of course, Wonderground. Pick went on to set up the Empire Marketing Board poster sub-committee and brought in Gill to create a number of posters there, including the magnificent Highways of Empire (1927). Attracting a great deal of contemporary interest, his advertisements reflected changing attitudes to Empire and global trade, as well as approaches to cartographic representation. The exhibition will show how he both embraced the modern age and yet also drew heavily on the past: mythical sea monsters and full-rigged galleons seen on his book cover for Sea Magic by E. Hallam Moorhouse (1916) feature alongside the aircraft and wireless transmitter masts decorating his maps, heralding the dawn of the mobile phone and the internet. His architect’s eye was drawn to buildings and technology rather than the human figure, and yet humanity is ever-present in his work, thanks to his humorous and charming way of seeing and recording the world he lived in.

Accompanying the exhibition will be a display in the museum’s Print Gallery, which will take a look at the impact that WWI had on artists in and around Ditchling including, amongst others, works by David Jones, Joseph Cribb and Philip Hagreen. 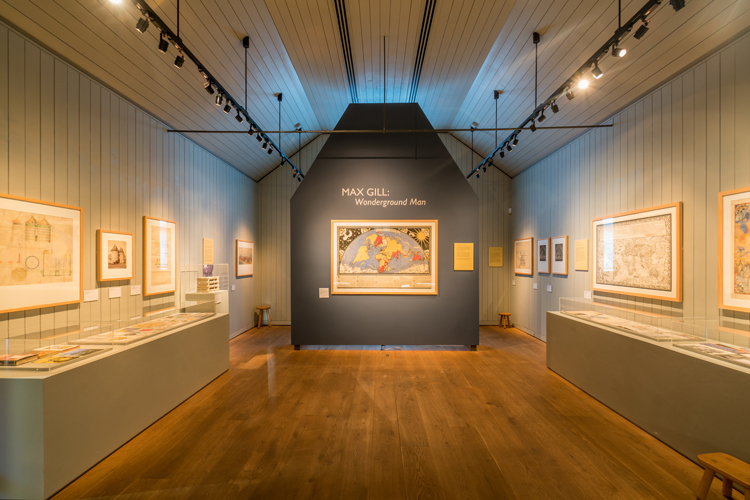