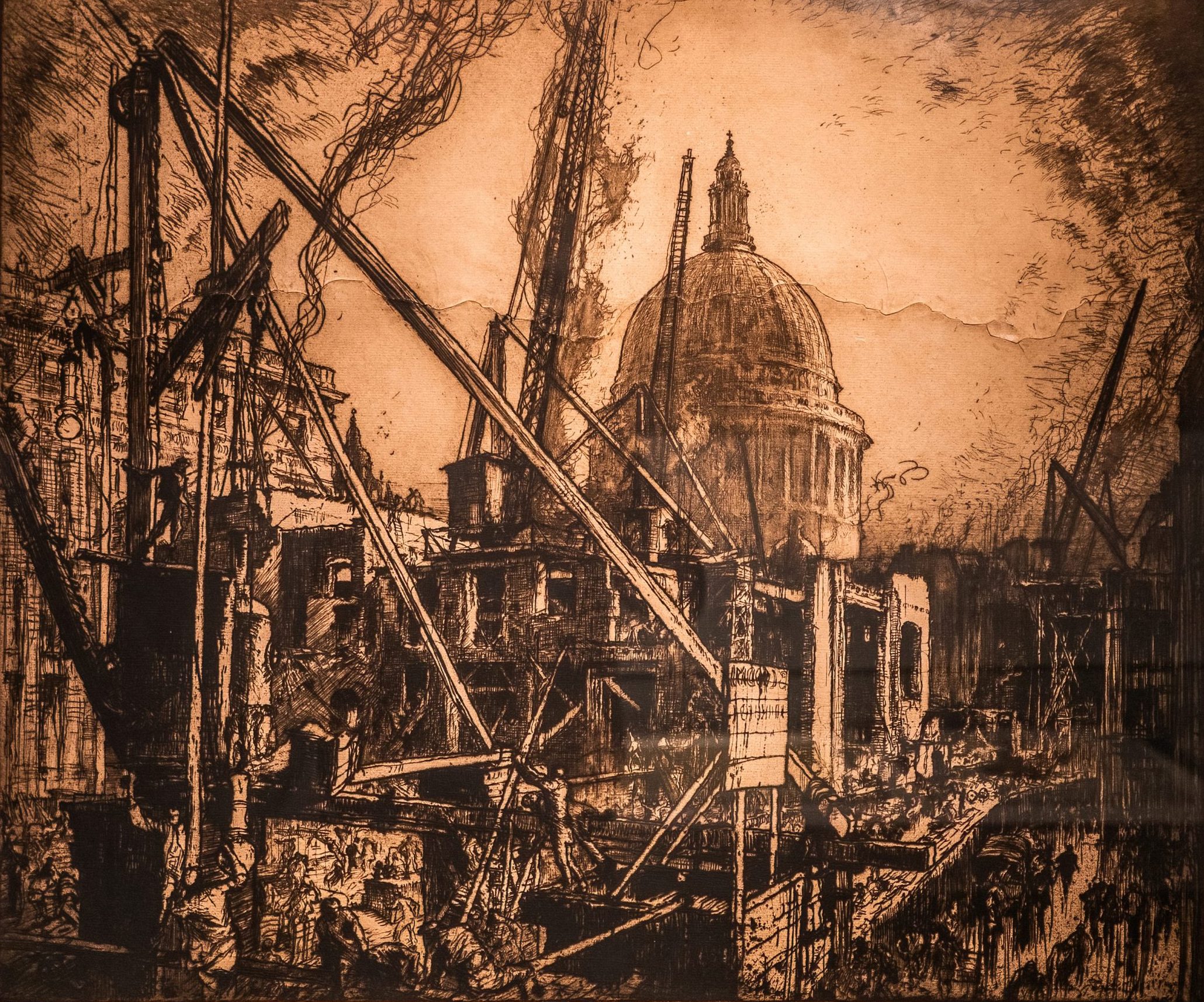 On a clear and crisp afternoon in early December 2011 a man in a long trench coat and hat walked into Bromley Museum’s Great Hall, deposited a large artwork and swiftly left.

The staff were, unsurprisingly, perplexed. The moment was caught on CCTV, but the man left so quickly no member of staff had a chance to speak to him.

Upon closer inspection, a note was found on the bag enclosing the artwork:

And so, an investigation began for the team at Bromley Museum Service. They set out to discover more about the artwork, find out who owned it and how it ended up in a skip.

The Museum of London identified the work as ‘Demolition of the Post Office’ by Sir Frank Brangwyn. Brangwyn was a prolific artist in both talent and scale. He worked for William Morris in his early career, and like his master he was active in a variety of fields. Brangwyn was a skilled etcher and lithographer, painter, illustrator, draughtsman and designed furniture, textiles and ceramics.

Marie-Louise Kerr (then curator at Bromley Museum Service) contacted a Brangwyn expert who shed more light. They asserted that the work was an etching produced in 1913 from a zinc plate by Brangwyn, one of between 100-150 proofs he would have produced from the plate.

Although Brangwyn remains strangely underrated today, in the early 1900s he was one of the most revered artists and muralists in Europe, the United States, Australia and Japan. He was elected a Royal Academician in 1919, knighted in 1941, held the presidency of a number of societies and received countless medals, diplomas and distinctions from Britain and overseas. In 1952 Brangwyn became the first living artist to be honoured with a retrospective show at the RA.

Recognising the prestige of the etching, the Bromley Museum Service team were concerned it had been dumped in the skip after a robbery. They contacted the Art and Antiques department of New Scotland Yard to see if the etching was on the London Stolen Art Database, as well as checking the Art Loss Register, however the work had not been reported missing.

With questions of its provenance remaining, the Bromley team began to look for a suitable home for the artwork with the help of the William Morris Gallery, who suggested Ditchling Museum of Art + Craft. Brangwyn owned property in Ditchling’s thriving artist community from 1917 until his death in 1956, often using villagers as models for his murals.

We gladly accepted the etching and have been its custodians since 2012. Until we discover the true provenance of the piece the museum cannot accept it formally into our collection, but we are delighted to be caring for it alongside our collection of Frank Brangwyn’s work. Our current Brangwyn exhibition has presented the perfect opportunity to display the etching for the first time in its temporary home.

We may never know how the etching ended up in a skip, but thanks to the quick thinking of two London labourers, it survived to see the light of day once again and has helped bring this forgotten artist back to the forefront.

Demolition of the Post Office, 1913, Frank Brangwyn is exhibited as part of Frank Brangwyn: The Skinners’ Hall Murals at Ditchling Museum of Art + Craft until 16 October 2022.