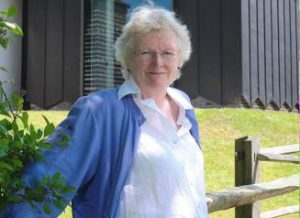 As the daughter of Valentine KilBride, Jenny was brought up among members of the Guild of St Joseph & St Dominic. In 1972, when she was 24 years old, she joined her father in the workshop and began to learn to weave. She became the first woman to become a member of the Guild in 1974 (there were only ever two female members: silversmith Winefride Pruden being the other).

After her father passed away in 1982, Jenny ran the family silk-weaving and vestment-making business until the Guild closed in 1989. She continued dyeing silk for her brother Gilbert, who carried on the family tradition in his workshop until 2010. A major commission from this period was the cope and mitre made for the Rt Rev Rowan Williams on his enthronement as Archbishop of Canterbury.

Following the winding up of the Guild in 1989 she worked at Glyndebourne Opera House. As a trustee of the museum at Ditchling, KilBride was extremely influential and effective in raising funds and generating momentum for the creation of the new Ditchling Museum of Art + Craft. Now retired, she has a workshop in her garden where she once again specialises in natural dyeing and silk weaving, using the equipment that was stored away when the family workshop closed.