To round off our #DyersTakeover for International Women’s Day 2021, we invited Jenny Dean to tell us about the influence Ethel Mairet has had on her practice, and to share some of her favourite Mairet recipes. We are offered a truly unique insight into Mairet’s work, as Jenny details notes written in pencil by Ethel Mairet inside the front cover of her own copy of Vegetable Dyes.

In 2016 Ditchling Museum staged an exhibition to commemorate the centenary of the publication of Ethel Mairet’s classic work A Book on Vegetable Dyes. This was one of the first British books on natural dyeing to reach a wide audience; it was so successful that it ran to five editions and remains a classic work which still has much to offer the natural dyer.

Ethel Mairet was an inspirational teacher, dedicated to passing on to future generations the knowledge and experience she had gained through her research into textiles from many parts of the world and her experimentation with natural dyes. She taught groups of students at her home in Ditchling and was an exacting teacher, who demanded the high standards necessary for professional natural dyers.

As part of the Ethel Mairet celebrations in 2016, I led a workshop at Ditchling Museum using recipes from Ethel Mairet’s dye book. Among the dyes we used were madder, weld and bracken.

More recently I led a similar workshop at the museum, again using Ethel Mairet’s recipes and on this occasion, Ross Belton joined me. 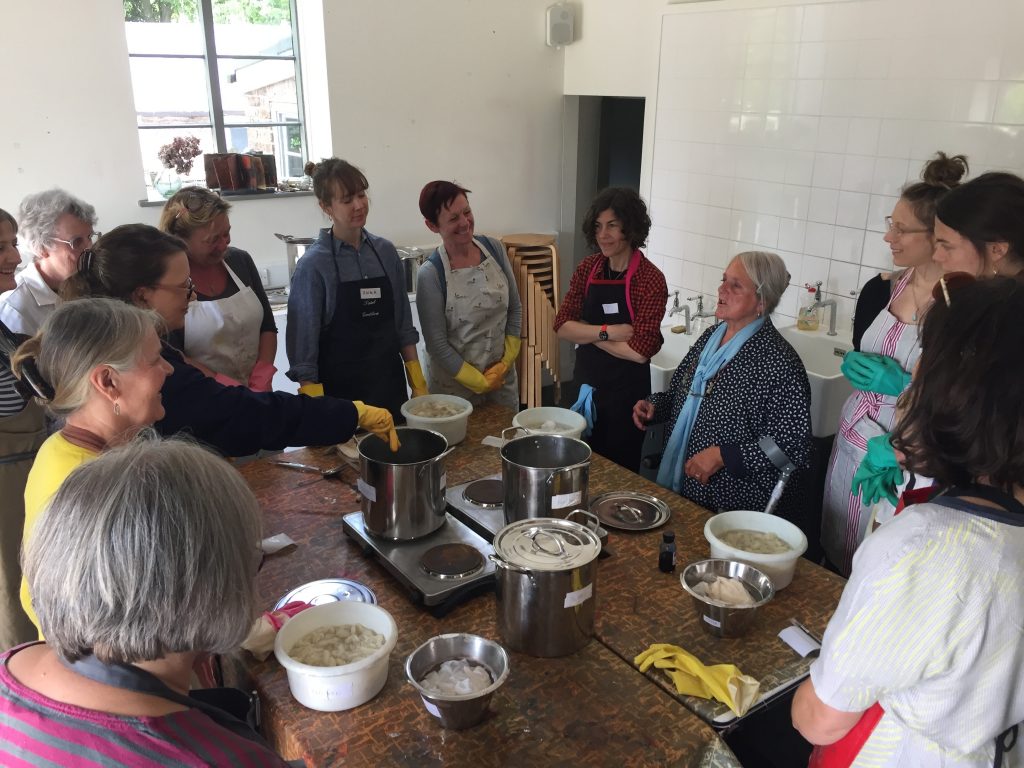 Below, in Ethel Mairet’s own words, are the details of some of the dyes and the Ethel Mairet recipes we followed.

The following notes were written in pencil by Ethel Mairet inside the front cover of her own copy of “Vegetable Dyes”:

Mordant with ¼ lb Alum to the pound of wool. Boil for 1 hour, let cool in mordant, wring out and put away in bag for 3 or 4 days. Wash very thoroughly. Then dye with 5 to 8ozs madder according to depth of colour required, and a handful of bran for every pound of wool. Enter in cool bath and bring slowly to the boil in an hour or more. Boil for a few minutes.

Or: If used for darkening colours, copperas (iron) is added to the dye bath, and the boiling continued for 15 to 20 minutes. (Note: we used this second method for brown from madder)

Weld, Reseda luteola is an annual plant growing in waste places. The whole plant is used for dyeing except the root. It is the best and fastest of the yellow natural dyes. The plant is gathered in June and July, it is then carefully dried in the shade and tied up in bundles. When needed for dyeing it is broken into pieces or chopped finely, the roots being discarded, and a decoction is made by boiling it up in water for about ¾ hour. It gives a bright yellow with alum and tartar as mordant……………8 percent of alum is often used for mordant for weld. A little chalk added to the dye bath makes the colour more intense; common salt makes the colour richer and deeper

Mordant with alum, and dye with 1 lb of weld for every pound of wool. Common salt deepens the colour. If alum is added to the dye bath, the colour becomes paler and more lively. Sulphate of iron inclines it to brown.

In the notes about iron in her book, Ethel Mairet writes: 4 per cent copperas (iron) 10 per cent cream of tartar gives good olive colours with weld. (Note: for a second colour from weld we used iron sulphate as a modifier after dyeing, which produced a green colour)

Bracken is among the dyes mentioned in Ethel Mairet’s list of British dye plants. Of bracken she writes: The introduction of the foreign dye woods and other dyes during the 17th and 18th centuries rapidly displaced the native dye plants, except in certain out of the way places such as the Highlands. Those which have been in use in the Highlands are most of them good dyes. Among these are ……..bracken, bramble……heather and many others.

For the workshop we used her first general method of dyeing wool as below. She writes:

The wool is boiled first with the mordant and then in a fresh bath with the dye. This method of dyeing is the most satisfactory and gives brighter and faster colours than the other methods. It is not necessary to throw away the solution after the mordanting has been done, but it can be replenished for a fresh lot of wool; a separate bath is used for the dye.

(Note: We added iron sulphate to the dyebath for a second colour from bracken.)

The other dyes we used were cochineal (pink) and indigo (blue). Cochineal is an insect dye and we used it following the general methods of dyeing wool. The form of indigo we used was Saxon Blue which is an indigo extract made by dissolving indigo powder in sulphuric acid. The process was discovered around 1740. It is called Saxon Blue because the blues it produced resembled the blues of ceramic wares based on cobalt and Saxony was the centre of that industry. 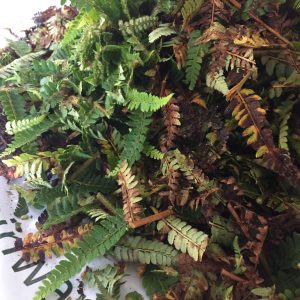 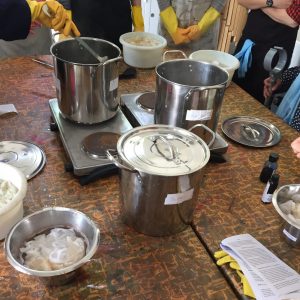 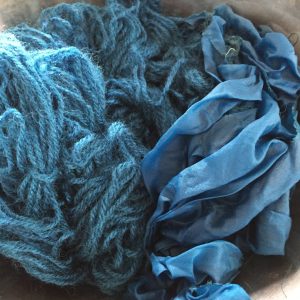 Jenny Dean has been working with natural dyes for four decades. She lectures on natural dyeing and has written widely on the subject. Her books include Wild Colour, Colours from Nature and A Heritage of Colour.  Her work has been featured in several magazine articles and on BBC Radio. Her naturally-dyed yarns are in collections at the Cambridge Museum of Archaeology and Anthropology and at the Royal Centre for Cultural Heritage in Brussels.

You can find out more about Jenny Dean on her website: www.jennydean.co.uk.

The main image shows (L-R) Mairet as a young woman, her publication Vegetable Dyes, and Mairet later in life.