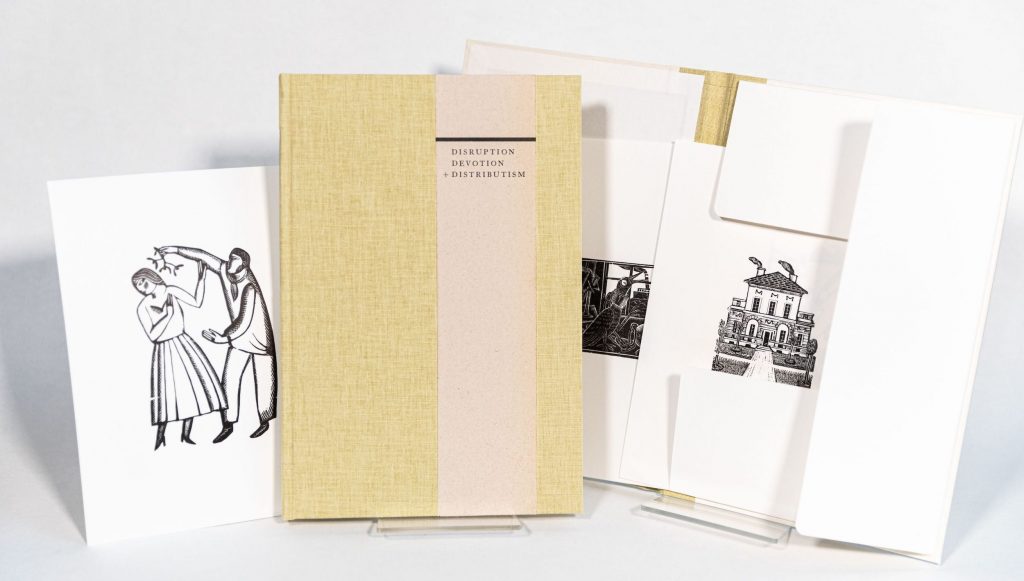 When we were starting to shape an exhibition focussed on the museum’s major acquisition of work produced by the St Dominic’s Press in Ditchling, we wanted to focus on the ideas of the community of artists and craftspeople whose work was represented, and in particular the members of the Guild of St Joseph and St Dominic, which was founded 100 years ago, their approach to making work and their political radicalism. This eventually became the exhibition Disruption, Devotion and Distributism which ran from October 2019 to March 2020 when it was sadly cut short by the advent of the pandemic. The Press, under the direction of Hilary Pepler was such an important aspect of the Guild, and represented both their approach to production, with its emphasis on high quality materials and skilled hand work, and their thinking, through publications, books and pamphlets including The Game an irregularly produced magazine collecting together and republishing interesting articles, images and new writing in an eclectic and sometimes humorous way. 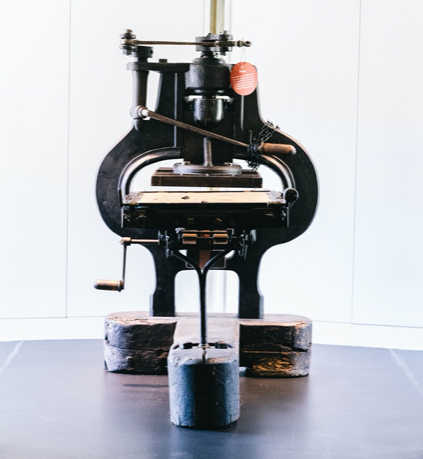 A hero of the museum’s permanent collection is the Stanhope Printing Press which was the first press acquired by Hilary Pepler and represents the very beginning of the St Dominic’s Press. We wanted to use the press in the museum during the exhibition to demonstrate how letterpress printing worked, bringing the process alive for visitors.

We invited Pat Randle of Nomad Letterpress to undertake a residency at the museum during the exhibition and to produce some kind of publication as a result. At that stage we had no firm plan for what that would be. Pat is co-editor and printer of Double Dagger magazine and printer of Matrix, and has led letterpress workshops and demonstrations throughout the UK and Europe. A highly skilled letterpress printer and type enthusiast, he was the ideal person to bring this idea to life. Pat spent time at the museum looking at our collection of type and woodblocks, planning the possible content for the book and was particularly enthused about the rare typeface Jubilee, designed by Eric Gill and launched in 1935 for the King’s Jubilee. However, the Jubilee typeface did not become popular and was withdrawn eventually in 1947 so it is now rarely seen.

He was also very keen to use some of the beautiful engraved wood blocks made by artist David Jones for the press, and this element was eventually expanded to the special edition book with a separate portfolio of prints. 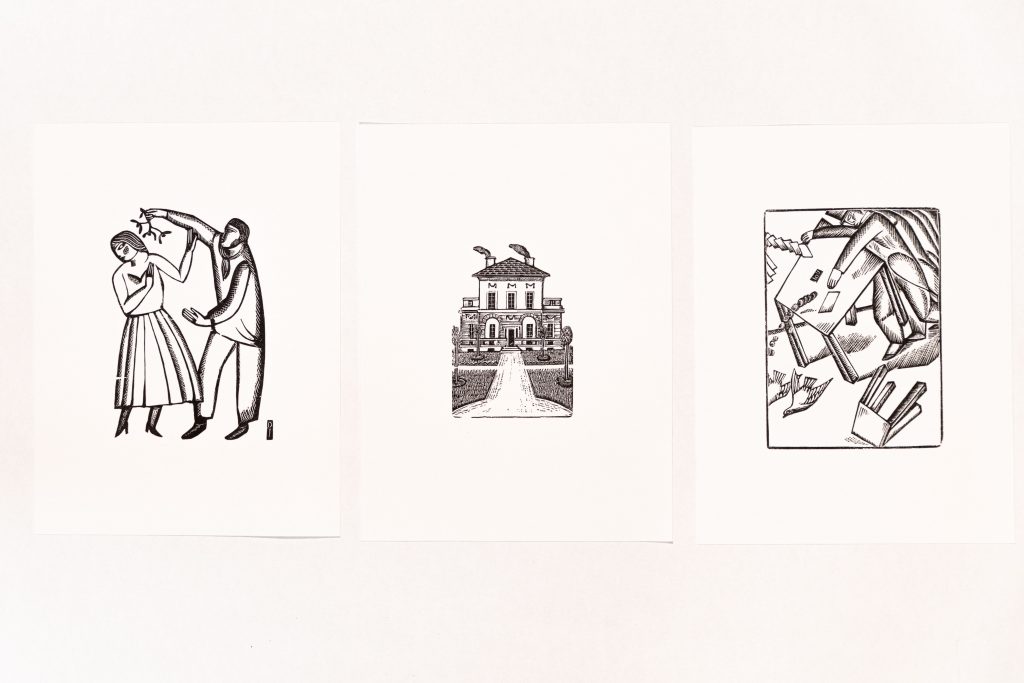 Text for the book was selected in order to reflect the work of the press and concerns of those involved.  This includes Eric Gill on his love for Caslon Old Face, “Caslon’s Old Face is thoroughly decent in every respect”, the type Pat used for the majority of the book and Brocard Sewell’s memories of working at the St Dominic’s Press in its later years, including an account of ‘type battles’ amongst the printers when the Boss (presumably Hilary Pepler) was absent. 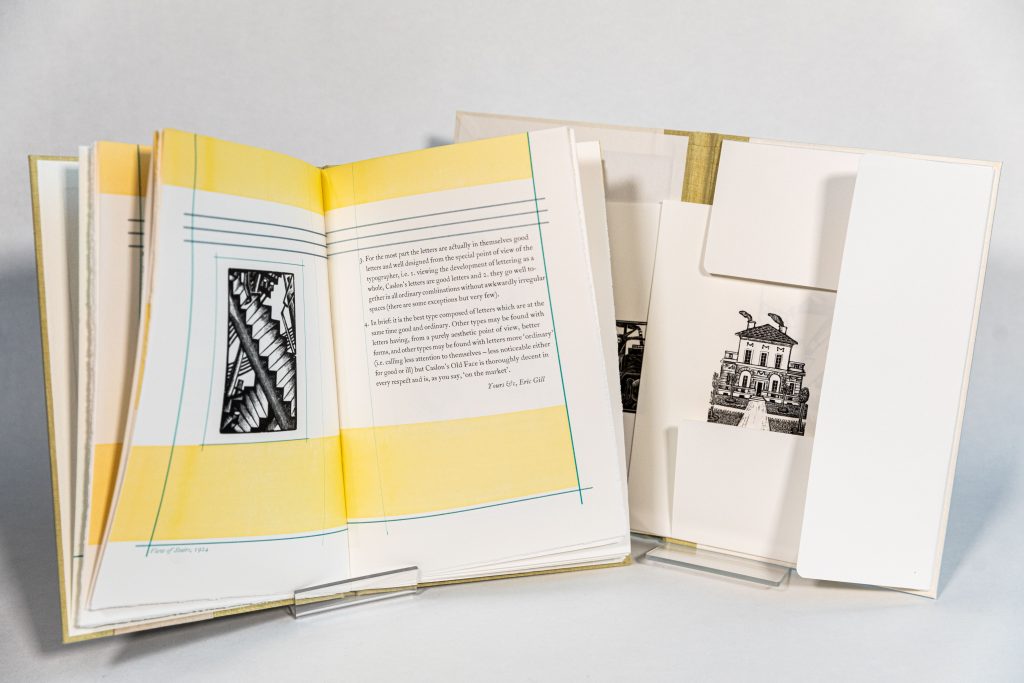 With printing taking place at the museum, and later work being finished at the Nomad Press, Disruption, Devotion and Distributism the book took shape over an extended period, and is now available for sale in two formats, a tribute to the continuing vitality of letter press printing, and the outstanding achievements of the St Dominic’s Press as a printer and publisher.

We are hugely grateful to Pat Randle for his work on this publication, and to the National Lottery Heritage Fund who supported the purchase of the Barry Marks St Dominic’s Press collection and the development of the exhibition.

You can buy a copy of Disruption, Devotion + Distributism Standard Edition here, and the Special Edition here. Please bear in mind that we have extremely limited numbers of these very special books.