Every museum’s collection has hidden stories, and Ditchling Museum of Art + Craft is no different. Despite the fact that our collection is from the recent past, we know that there are hundreds of untold tales hidden in the objects and ephemera we care for. It has long been a desire of the museum to conduct research into some prevailing themes in the DMAC collection – stories of LGBTIQ+ lives and creative partnerships, and the experiences of the disabled artists whose work is housed in our collection.

This year, the museum was awarded a grant from Arts Council England enabling us to start exploring these stories.

This major new project will see us working collaboratively with D/deaf, disabled and LGBTIQ+ people to explore unexplored narratives in our collection, and devise artistic work and an events programme in response. We are delighted to be working with Disability Arts Online to deliver this project, in collaboration with artist Natasha Sutton Williams and curator E-J Scott. Here’s a little more from Director Steph Fuller, and project partner and editor of Disability Arts Online, Colin Hambrook.

Steph Fuller, Director and CEO of Ditchling Museum of Art + Craft:
As a museum whose collection starts from the early 20th century, we have many objects made by people about whom we know relatively little, and whose lives are not well documented.  Different Stories is an exciting opportunity for us to address this, undertaking research into the lives of some of our collection artists and makers and giving us new insights into their lives and practice.

Colin Hambrook, Editor of Disability Arts Online:
Ditchling Museum holds a unique place in the history of the arts and crafts movement in the UK as the hub of a particular stance on modernism that had a powerful influence on English culture from the early part of the 20th century onwards. It’s very exciting to be involved in the Different Stories project and research that will endeavour to tell the stories of a small community of artists who demonstrated an ethos of tolerance towards difference that underpinned their belief systems and code of working practices. From Disability Arts Online’s perspective we are thrilled to be supporting a focus on the research endeavouring to shine a light on disability and queer stories that were at the heart of this Arts and Crafts village.

We spoke to the the artistic collaborators at this early stage of the project, to find out what has piqued their interest in the collection so far. 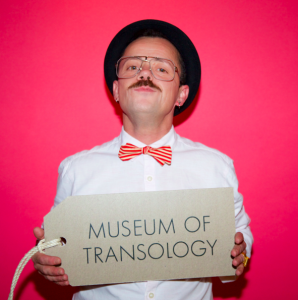 E-J Scott is a fashion historian, and the curator of The Museum of Transology.

In a Queer Little History of Art, art historian Alex Pilcher locates “…the fertile interrelationship between art and the modern queer experience.” (Pilcher, 2017). It appears that just such a ‘fertile relationship’ was at the very heart of the lives of partners Hilary Bourne (1909 – 2004) and Barbara Allen (dates as yet unknown). The two women established themselves as leading British, mid-century textile designers, who ran a highly successful studio unabashedly called “Hilary Bourne. Barbara Allen. CONTEMPORARY TEXTILES”. Having met in 1935, they lived, designed, weaved and ran a profitable business together for nearly 40 years. Tragically, whilst staying in a hotel in Cambridge in 1972, they were both caught in a fire, in which Barbara Allen perished and Hilary Bourne was left both badly injured and grieving. At her sister Joanna Bourne’s suggestion and 13 years after Barbara Allen’s death, Hilary tackled her lingering mental health trauma by co-founding Ditchling Museum of Art + Craft in 1985. Few mentions were made in the museum’s initial narrative of the women’s career outputs and their studio’s international success: an absence of content that is undoubtedly a testimony to Bourne’s enduring grief. 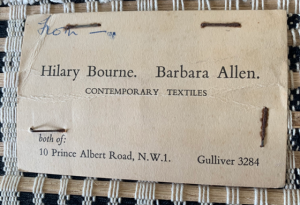 By tracing the output of Bourne and Allen’s studio and mapping the trajectory of their shared lives and careers, this research project will consider the way in which their contemporary design signatures were informed by their mid-century queer experiences. The term ‘queer’ is used to encapsulate the closeness of Bourne and Allen’s shared lives over four decades. There is no need to investigate, nor prove, the depths of their relationship– it is enough that they shared space at home and at work, and were clearly each other’s most important critic, confidante and companion. Unmarried and by each other’s sides, they navigated a post-war man’s world in business and production. Ultimately, their combined joy of design and collaborative creative outputs ensure that their work rightly falls under the canon of Queer British Art. Their distinct stylistic oeuvre was rooted in modernist principles, frequently featuring clean, repetitive, linear stripes reminiscent of Mondrian or the Bauhaus. From the use of natural dyes for hand-woven textiles they made for Brutalist interiors bullish in scale, such as the East Sussex blackberry tips used to dye fabrics produced for the Royal Festival Hall in 1951 (hung alongside furniture designed by Robin Day), to their early adoption of the metallic yarn, LUREX, invented in 1948 (Ditchling Museum of Art + Craft has a scarf they produced in its collection, c1953), the women shared an eye for outputs that stimulated a queer disjuncture via the application of traditional women’s craft in hyper-masculine, über-urban architectural environments.

In contrast to the easily recognisable aesthetics of camp effeminacy (theorised by Susan Sontag in 1964) often associated with gay male design, the creative collaboration of Bourne and Allen produced a cutting-edge, handsome and distinct visual language that was the direct result of threading the creativity entrenched in their intimacy into their shared passion for weaving. In this way, they upheld the founding principles of the Arts and Crafts movement, preserving the ideal unity of art and life, and combined, their work and relationship adds a significant contribution to the social and political importance of Ditchling’s historic artistic output. 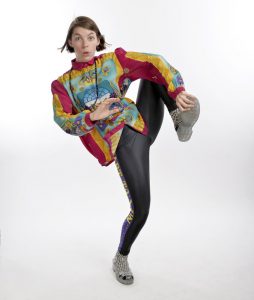 Natasha Sutton Williams is a writer, composer, actor and journalist.

For the Different Stories project I will be investigating the life and craft of Amy Sawyer, Barbara Allen, and Hilary Bourne. Researching these cutting-edge craftswomen is like opening the lock to a chest of textured gems. Bourne and Allen’s innovation through weaving and utilising ancient techniques to create striking contemporary pieces lauded in their day is a tribute to their finesse and skill. Learning of Sawyer’s artistic endeavours in playwriting, sewing and painting is fascinating; she is the epitome of a renaissance (wo)man.

The idea that Sawyer’s withered hand was caused due to toxic paint accumulated under her nails is not only tragic but shows the lengths she endured to continue to create art. Sawyer’s physical struggle has contemporary resonances with eccentric artistes such as John B McLemore in the podcast S-Town, who slowly poisoned himself renovating antique clocks through the outmoded art of “fire-gilding,” an illegal chemical process involving the melting of mercury and gold together to leave a textured layer of gold on other metals.

As an intersectional artist, I am intrigued to see how disability and sexuality played a part for these Ditchling craftswomen. I want to examine what these concepts of identity may have meant to them personally, and how it may have affected their artistic output.

My research goal is to excavate the inner workings behind these women’s creativity, why they created the work they did, and what they were trying to express through its form, whether through dramatic text, sewing, weaving, or painting.

You can keep up to date with the project by following DMAC and Disability Arts Online, as our collaborators dive deeper into these fascinating untold tales #DifferentStories