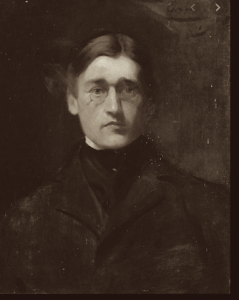 Louis Ginnett was born on July 24th 1875 into the atmosphere of his father’s circus at one time operating from the old Gaiety Theatre in Lewes Road Brighton. He was educated at the Brighton Grammar School then in Buckingham Road, and studied art at the Brighton School of Art where in 1909 he began to teach. He taught there for 37 successive years, only interrupted by the first World War. He was not an official War Artist, but drew and painted through this time on the front line.

In 1919 Louis Ginnett came to Ditchling. He lived in Chichester House in the High Street until his death in 1946. He became known as a portrait painter and many of his portraits show his daughter Mary as she grew up. He worked with the architect John Denman who lived next door in Bank House.

He designed the pylons which mark the entry to Brighton along the A23 and, most famously, the panels in the school hall at his old school, now BHASVIC in Dyke Road. These nine panels were begun in 1913 and completed in 1939 and depict scenes from the history of Sussex. He designed in stone, glass, metal and plaster, but always referred to himself as a painter.