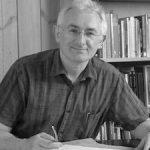 Ewan Clayton grew up in Ditchling. His family worked as weavers in the Guild of St Joseph and St Dominic.

Ewan was a member of the Guild before it closed in 1988. He trained as a Calligrapher at the Roehampton Institute with Ann Camp and assisted her with teaching there. In the mid 1980s Ewan lived as a Benedictine monk at Worth Abbey in Sussex. After leaving the monastery he was hired as a consultant to Xerox’s Palo Alto Research Laboratory.

Today Ewan is a Professor in Design at the University of Sunderland where he assists in directing their International Calligraphy Research Centre. He steered the old Roehampton calligraphy courses through to degree status; established Sunderland University’s course at Kensington Palace, and is a core member of staff at The Royal Drawing School. In 2013 Ewan was named the Craft Champion of the year for his contribution to educating others in the Crafts in the first National Craft Skills Awards. He was awarded an MBE in the 2014 New Year’s Honours List.