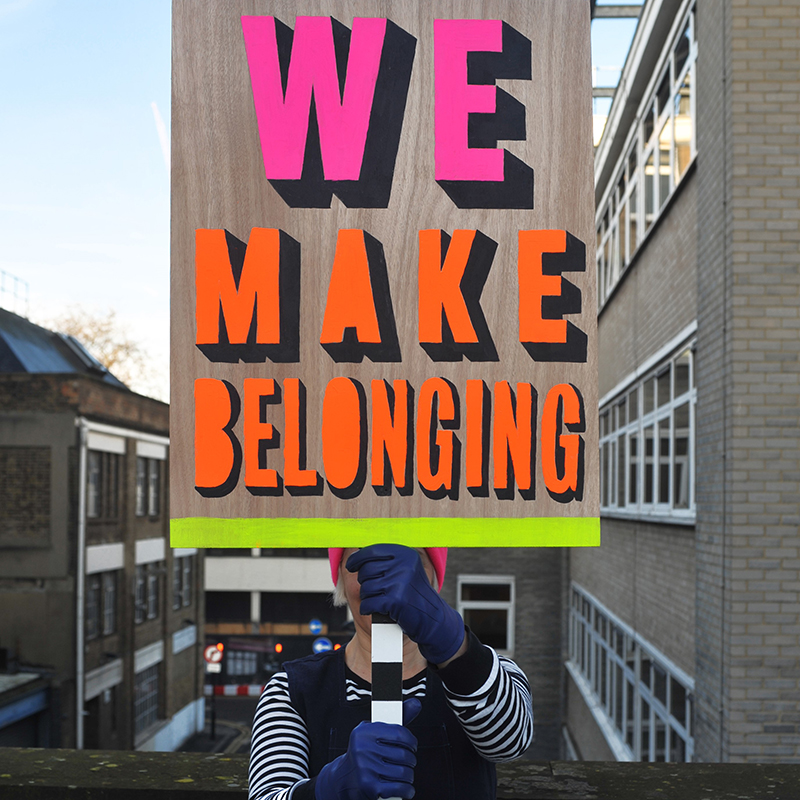 Look out for award-winning contemporary designer Morag Myerscough’s new work Belonging, touring around Sussex throughout the summer. Co-commissioned by Brighton Festival and Ditchling Museum of Art + Craft, Belonging celebrates the spirit of seminal 1960s Los Angeles artist Corita Kent whose work brought together a belief in the strength of creativity, togetherness, love and social justice. It will be Myerscough’s first-ever mobile installation: a bright, bold, touring bandstand programmed in conjunction with communities across Sussex.

Myerscough will run workshops based on assignments taken from Corita’s inspirational book Learning from the Heart (a blueprint for creative exploration and community empowerment, published posthumously in 1992), to produce creative visual responses to the theme of ‘belonging’. Each group will then work with Morag to create a series of placards that will adorn the crown of the specially-commissioned bandstand. Fully portable, the structure will be hard to miss as it is taken on a countywide tour of festivals and community events, programmed for the enjoyment of local residents and visitors. One workshop participant from the Crawley community felt that:

[The workshop process] left me with a great sense of acceptance of where I am and who I interact with but, more importantly, a huge and warm feeling of Belonging!”

Launching at the Children’s Parade on the opening weekend of the Brighton Festival, the Belonging Bandstand will tour to Your Place venues in Brighton and on to the South of England Show at Ardingly, Crawley Festival, Newhaven, Ditchling and Coastal Currents Arts Festival in Hastings, taking on a different local character with each new iteration as the placard formation of the crown is changed to show off the communities’ own designs, and as the bandstand is programmed with local performers.

Myerscough is internationally renowned for her dazzling, colourful, typographical designs, and discovered a kindred spirit in Corita’s work and spirit:

I feel a deep connection to Corita’s approach as she is about being REAL. Corita insists that ‘creativity is based on close observation of the ordinary’. I know I often have to dig deep and start appreciating the small things around me, what are the things that really make you happy, it does not have to be about fame and fortune but about love, friendship and working together to make things better. Corita taught her students how to keep ‘their eyes and minds open’ which is so essential to continue doing relevant work at any age that can connect to the world around us and make a difference.”

The project has been made possible by funding from Arts Council England. Steph Fuller, Director of Ditchling Museum of Art + Craft, commented:

I’m delighted that we have received such generous support from Arts Council, England. Together with artist Morag Myerscough, our co-commissioning partners Brighton Dome & Brighton Festival and our partners out in the community, we will now be able to bring an amazing artistic project to Brighton and Sussex, growing our audiences and giving more people opportunities to take part in arts and culture.“

We are thrilled at the prospect of supporting Morag to undertake this project and to once again partner with Ditchling Museum of Art + Craft, which we believe will enhance the visual art and participation offer of the Festival and our surrounding communities.”

We are really excited to be hosting the Morag Myerscough bandstand at the South of England Show on 7 – 9 June this year. Her work with community building and the theme of ‘belonging’ reflects our work as a charity, bringing town and country folk together to enjoy a unique showcase of agriculture, horticulture, equestrianism and the countryside. Her bandstand will be the centre-piece of our Family Zone where people gather to enjoy great music, food and entertainment”.

The project accompanies the exhibition Get With The Action: Corita Kent, showing at Ditchling Museum of Art + Craft from 5 May – 14 October 2018. Corita was an American artist, a famously charismatic educator and a Roman Catholic nun based in Los Angeles during the 1960s. As an advocate for social justice, she believed in the democratisation of art, producing screen-printed posters and banners incorporating advertising slogans, song lyrics, biblical references and commercial design into her Warhol-inspired work.

The exhibition will feature a commission reflecting on the concept of belonging in the museum’s Wunderkammer by Myerscough and Luke Morgan. A second edition of the duo’s Sign Machine (2016) will also be installed in the introduction space.