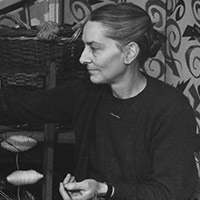 Bourne spent much of her childhood in Ditchling. She learnt to weave in Palestine and worked briefly as a designer for Ethel Mairet just after World War II; it was at Mairet’s Gospels workshop in the village that Bourne learnt aniline dyeing from Margery Kendon and Muriel Barron (Barron & Larcher).

In 1972, Allen tragically died in a hotel fire in Cambridge. Bourne survived but was severely injured. She retained strong lifelong connections in the village and founded this museum with her sister Joanna in 1985.

We’d like to know more about Barbara Allen, if you know anything please get in touch here.