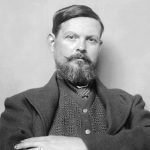 Guillaume Francois Brangwyn – known as Frank – was born in Bruges.

Brangwyn’s mentors were A H Mackmurdo, William Morris and Siegfried Bing. They all instilled in him a strong work ethic and the importance of drawing from nature. Bing also encouraged him to broaden the range of work he designed to include murals, furniture, posters and stained glass.

Brangwyn bought The Jointure in Ditchling in 1917 after visiting Sussex to paint the Downs, though he retained a house in London and used the Jointure as a holiday home. After his wife died in 1924 Brangwyn seems to have preferred to live in Ditchling, where he then established a studio.

He produced a huge range of work throughout his life. He is probably best known for the rejected mural panels for the House of Lords, now in the Brangwyn Hall in Swansea. He was commissioned to produce the subsequent Rockefeller Murals at the Rockefeller Center in New York, for which he used villagers as models.