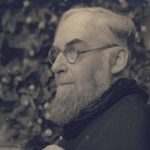 Desmond Chute was born in Bristol. His widowed Roman Catholic mother sent him to Downside School. Rejecting the idea of  university, he attended the Slade School of Art, London.On returning to Bristol during World War I he became close friends with fellow ex-Slade student Stanley Spencer.

Chute met Gill when visiting Westminster Cathedral in 1918, and their friendship developed rapidly. He visited Gill’s family in Ditchling and decided to move to the Common and learn to carve stone. Gill designed a house for Chute, Wood Barton, next door to Gill’s family house

In 1921 Chute applied to be ordained to be a priest and moved to Switzerland. Ill-health kept him abroad. He socialised with writers and intellectual such as Ezra Pound and W B Yeats

Though Chute and Gill worked together for a very short time, Gill wrote to Chute two months before his death: