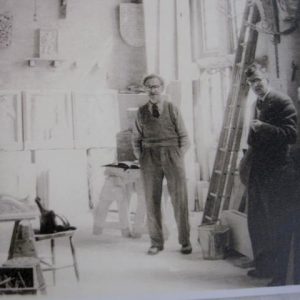 Joseph Cribb grew up in London. His father was a draughtsman and illustrator who had worked with, amongst others, William Morris.

In 1906 Cribb was apprenticed to Eric Gill at his Hammersmith studio. In 1907 he moved to Ditchling with the Gill family. Cribb was a skilled letter cutter and carver. Gill used Cribb to work on many of his major commissions, such as the lettering on Oscar Wilde’s tomb.

Cribb’s apprenticeship ended in 1915 when called away for war service. He worked with MacDonald Gill on the design of the standard war grave, returned to Ditchling in 1919 and in 1920 joined the Guild. After Gill’s departure for Wales, Cribb ran the stonemason’s workshop, taking on his own apprentices.

Cribb was a central figure in the Guild. He is fondly remembered by those who grew up on the Common, not least for his encouragement to visitors to his workshop to try their hand at carving.