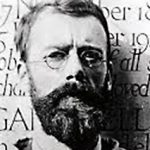 Eric Gill was born in Brighton and grew up in Chichester. In 1900 he began his career as a draughtsman in an architect’s office in London. In the evenings he studied lettering classes taught by Edward Johnston and masonry. In 1905 Gill and Johnston moved with their families to the Arts & Crafts community in Hammersmith and Gill set up as an ‘inscription carver and calligrapher’.

The same year, he and Hilary Pepler converted to Roman Catholicism. In 1914 Gill was commissioned to carve the Stations of the Cross at Westminster Cathedral, a job considered important enough to exempt him from war service until its completion in 1918. He was a founder member of The Guild of St Joseph & St Dominic which was formally constituted in 1921.

In Ditchling, Gill developed his work as a sculptor and as a wood-engraver. His keen interest in lettering and printing resulted in his typeface designs, although these came after he had left the village. In 1924 Gill ‘fled to Wales’, as he described it, with his family to an abandoned monastery at Capel-y-ffin and then later to Pigotts in Buckinghamshire.

Gill’s abuse of his daughters came to light in Fiona McCarthy’s 1989 biography. Ditchling Museum of Art + Craft approached this challenging topic in Eric Gill: The Body, an exhibition in 2017 that showcased Gill’s depiction of the body and questioned how we view his work in the context of his disturbing biography.­ In the museum we take our responsibility for our audiences seriously and we will therefore only reference this in our displays if it specifically relates to a piece of work we are showing. If this is the case, we will contextualise it sensitively and without sensationalism.  This is a complex and difficult topic and subject to ongoing discussion by our curatorial team.

Find out more information about our organisational response.