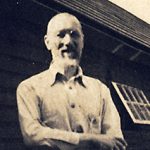 Philip Hagreen was born in Berkshire. He studied painting in Cornwall under Norman Garstin and Laura and Harold Knight. Like Eric Gill he was a founder member of the Society of Wood Engravers in 1920, though they did not know each other well at that time.

Hagreen converted to Catholicism during World War I. He was encouraged to visit Ditchling and settled here in 1923 where he learned letter cutting, temporarily ceasing painting and wood engraving. After a period in Wales with Gill he returned to Ditchling and resumed woodcuts and wood engraving. He also carved in ivory and used this skill when asked, on the works of Dunstan Pruden.

He was an important member of the community. The distinct style of his lettering and images appears in many works of the St Dominic’s Press and Guild publications. He was a follower of the Distributist movement that championed individual land ownership in rural communities. In both his work and in his social campaigning he often lightened rather serious subject matter with his sharp wit and humour.