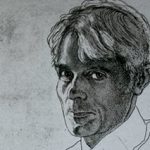 As a child Edgar Holloway attended art classes at a college near his home in Doncaster. By the age of 17 he had his first one-man show in London and began selling prints to major collections. He attended the Slade School of Art part-time while earning his living from both etching and portrait commissions.

Whilst in Wales in 1943 he visited the Gill family and met Daisy Hawkins, who had left her Ditchling home to work for them. They married six weeks later. When short of work in the post war period he turned his skills to drawing letters for a sign. This became the first of many jobs of lettering and sign writing that he continued throughout his working life.

In 1948 he visited Ditchling and settled in the following year. He began to study wood-engraving with Philip Hagreen and by 1951 had joined the Guild. Throughout his life he worked as a designer for publishers and a cartographer as well as continuing to etch and work in watercolour, the village itself and the Guild buildings, providing his subject matter.