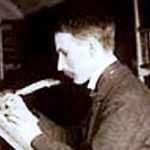 Edward Johnston was born in Uruguay, the son of Scottish settlers. In his late twenties he gave up medical studies in Edinburgh ‘to go in for a craft’. Living in London in 1898, he was encouraged by W R Lethaby, architect and educator, to begin to study manuscript writing held at the British Museum.

Lethaby offered Johnston a teaching post at Central School of Arts & Crafts, which he took up in 1899. In 1901 Eric Gill attended his calligraphy class and their friendship developed from then on. Both families eventually moved to Hammersmith, an area popular with the Arts & Crafts Movement, where they met the Pepler family. Johnston’s Writing & Illuminating, & Lettering, was published in 1906, and was to have a major impact on the field of lettering and established the modern calligraphy movement.

The Johnston family moved to Ditchling in 1912. After a period living on the Common and running a small holding with the Peplers, they moved back to the village. Johnston was to work and live in Ditchling for the rest of his life.