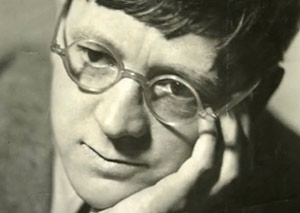 David Jones was born in Brockley, Kent. His father, originally from Flintshire, Wales, ensured he was deeply conscious of his heritage. Jones fought on theSomme during World War I and the sights and experiences of the war were to colour much of his life.

On Jones’ return to London he attended art school. In 1921 he converted to Roman Catholicism, and visited Gill in Ditchling. In 1922 he moved here to join the Guild workshops and was introduced to wood engraving. He produced many of the illustrations used in the St Dominic’s Press publications, placing image alongside the printed word with great sensitivity.

Though engaged to Gill’s second daughter Petra in 1923, they never married. Jones left Ditchling in 1924 and went to London, but then followed Gill to Capel-y-ffin in Wales, living there until 1928. For a time he joined the 7&5 Society, alongside Ben and Winifred Nicholson and Christopher Wood. In addition to painting and printmaking, Jones wrote extensively. He returned to the subject of war in two major poems: ‘In Parenthesis’ and ‘The Anathemata’.