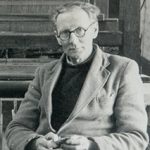 Valentine KilBride was born in Bradford and worked at his family’s industrial dyeworks. After serving in World War I he became interested in the craft revival, and in particular hand weaving and natural dyeing.

Inspired by Ethel Mairet’s book Vegetable Dyes, he became her apprentice at her workshop in Ditchling. Here he made friends with fellow apprentice, Petra Gill, and was soon visiting the Gill and Pepler families on a regular basis.

In 1924 KilBride asked Eric Gill if he could join the Guild and in 1925 he moved to Ditchling Common and set up his own weaving and dyeing workshop, joined by Bernard Brocklehurst in 1927. They specialised in silk weaving and vestment making becoming known for the simple beauty of their Gothic-style vestments in contrast to the more elaborate vestments that were in use at that time.

KilBride was a key member of the Guild of St Joseph & St Dominic for the rest of his life and integral to the development of its ideology, as well as its day-to-day organisation.