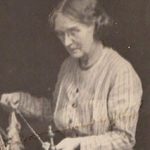 Ethel Mairet was born in Devon. Marriage to Ananda Coomaraswamy took her to Ceylon (now Sri Lanka) where she became interested in weaving and dyeing. She acquired her first loom in 1909, when she and her husband returned to Chipping Campden. Their friend, architect and designer, and Guild of Handicraft founder C R Ashbee restored their new home, Norman Chapel.

Mairet’s publication A Book on Vegetable Dyes was printed by Hilary Pepler at the Hampshire House Press, London. It was so successful it led to another 3 editions and her association with Pepler led her to Ditchling.

Gospels her new home with her second husband, Philip Mairet, included a workshop and sale room. It was situated at the bottom of Ditchling Beacon and was built to her sketches. Her many eminent students and apprentices included Hilary Bourne, Valentine KilBride, Petra Gill, Peter Collingwood and Marianne Scrub. In 1937 Mairet was the first woman to be awarded the Royal Designer for Industry.

Her approach to weaving was that you should be sensitive to the texture of the yarns, and the change in design responsive to the colour.