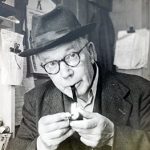 George Maxwell came to Ditchling in 1922. He was already a Dominican and was described by many as a serious and thoughtful man. Eric Gill welcomed him as ‘a very great Godsend, a dear good man of beautiful and intelligent humility’.

As well as making an important contribution to the community’s ideology, Maxwell brought great practical skills. He built several small houses for the Guild families, and created the Guild’s carpenter’s shop. This provided simple furniture, fittings such as door handles, and everyday objects used by the Guild community.

He built his first loom when the weaver’s workshop was established at the Guild. He continued to make them throughout the 1930s and after the War. Maxwell was able to respond to the growing demand for looms caused by both the increase in hand weaving in art schools and workshops in the United Kingdom, and by the difficulty in importing looms from post-War Sweden.

He was a keen follower of the Distributist movement and kept livestock, bees and grew his own food.