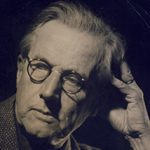 Harry Douglas Pepler was born in Sussex. He changed his name to Hilary on his conversion to Roman Catholicism. He became a social worker for London County Council, and assisted the development of the first school meals service.

Through living in Hammersmith he met Edward Johnston, Eric Gill and Frank Brangwyn. It was here he set up the Hampshire House Workshops and developed his interest in crafts. After Gill and Johnston moved to Ditchling, Pepler wrote to Johnston:

Can you think of any work I can do in Ditchling? We want an excuse to follow the prophet (you) into the wilderness.

In 1916 he moved here to become a printer, setting up St Dominic’s Press. The Press produced sacred and secular works, using illustrations by Gill, Hagreen, Jones and Pepler himself.

He was a founder member of the Guild but differed with Gill on the approach to it. After being expelled from the Guild in 1934 he moved the Press from the Common to the village and renamed it Ditchling Press in 1937.