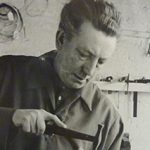 Alfred Charles Pruden was brought up in Hammersmith. He took the name Dunstan on his conversion to Roman Catholicism. He attended the Central School of Arts & Crafts and then worked as an assistant to a goldsmith based in London.

Pruden was interested in Eric Gill’s writings and ideas. Gill contacted Pruden when he had heard that Pruden had given a lecture on him. On meeting both men realised that they had much in common. Gill then recommended Pruden for his first major commission, an altar cross for Exeter College, Oxford. This commission was important in establishing Pruden’s reputation. He completed many more commissions for ecclesiastical metalwork alongside jewellery and more domestic items.

In 1932 Pruden moved to Ditchling and became a member of the Guild. In 1933 his book, ‘Silversmithing’ was published by St Dominic’s Press with illustrations by Philip Hagreen. This helped him secure a teaching post at Brighton Art College where he was to teach for over thirty years.