The world is made up of two different kinds of Christmas gift-givers: those who leave the shopping to the last minute, and those who like to think ahead and put time and effort into making their own special gifts and cards, maybe even make some extra to sell. The prolific artists and makers behind St Dominic’s Press certainly fell into the latter category.

With our current exhibition ‘The Book Beautiful: William Morris, Hilary Pepler and the Private Press Story‘ at the forefront of our minds, we take a look through our collection to see how Hilary Pepler’s St Dominic’s Press prepared for the season: commercial Christmas card catalogues, personal gifts, notes and cards to friends and family are abundant, all with their own distinctive style. Exquisite engravings, prints and letterpress messages by guild members Eric Gill, David Jones, Philip Hagreen and Hilary Pepler jostle alongside of those other colleagues and fellow artists including Mary Dudley Short and Edward Walters. 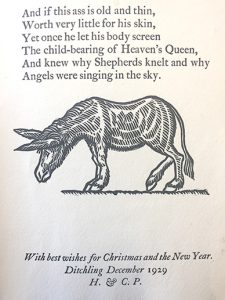 The card catalogues are particularly interesting – after all, St Dominic’s Press was not just a symbol for an artistic and social philosophy, but also a practical concern with a job to do and Hilary Pepler was keen for the old Stanhope to earn its keep. Posters for local enterprises and even beer labels were amongst its first commissions.

A typical Pepler-penned 1931 leaflet, published at the height of the economic depression and entitled ‘A Christmas List with a Preface on Unemployment‘, includes the introductory passage: ‘I remember to have heard of an economist whose remedy for trade depression was that everyone, and more especially the rich, should spend as much money as possible. Except as applying to my own customers, and then only in their relations to me, I should be doubtful about advising the application of this panacea to our present distress.‘

It is unclear how and to whom the leaflet was distributed, but it is a fascinating insight into Pepler’s philosophy – a mixture of educative lecturing, social awareness, humour, and an all-important eye on the sales. The preface is a short essay on the contemporary economic crisis, expressing a belief that ‘One cause of unemployment would appear to be in over-production – as anyone acquainted with the modern factory should long ago have foreseen‘.

In a knowing and typically humorous footnote Pepler jokes ‘Some people have under-consumed our publications – several St Dominic Press first editions can be bought at published prices, many flats in Tooting are without even copies of ‘Aspidistras‘.

The rest of the leaflet is a list of gift suggestions consisting of St Dominic’s Press publications described as being ‘printed on a Handpress and, except where starred, on hand-made paper‘, and categorised under tongue-in-cheek titles such as ‘Presents for Pious Parents‘, ‘For A Lover‘ and ‘For Aunts, Grandparents, School Friends, “Also Rans,” &c‘. The publications range in price from 2s 6d for ‘Three Wise Men. A short play in which Herod takes an important role‘ to the grand price of 30s for ‘Horae B.V.M. (1923), in red and black. Gregorian Chant. Wood engravings by Eric Gill and Desmond Chute‘ (an approximate relative value of £7 and £90 today).