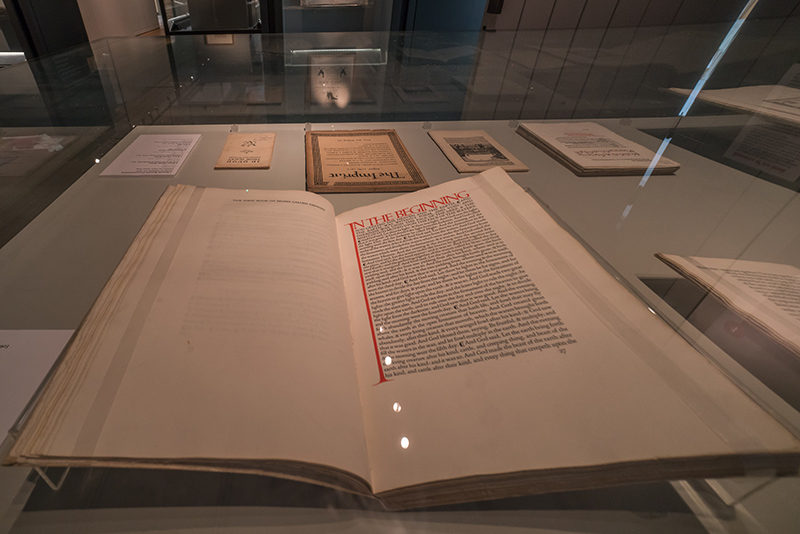 One of the many stories behind our exhibition ‘The Book Beautiful: William Morris, Hilary Pepler and the Private Press Story‘ includes a struggle between pragmatism and obsession. For those uninitiated in the intricacies of design, the idea of becoming obsessed over a typeface may seem alien, but passions ran high in the Arts and Crafts movement and veterans T J Cobden Sanderson and Emery Walker did not come out of their partnership unscathed.

Cobden Sanderson was originally a barrister by profession, but his friendship with William Morris led to him becoming a book-binder. In 1893 he set up a bindery in Hammersmith (the crucible for many artistic movements in the late 1800s), naming it after a nearby pub, The Dove. He was passionate in his belief that the beauty of the printed page depended upon the precision and clarity of the layout and an intimate relationship between calligraphy and type; in 1900 he was joined in his Doves Press venture by Emery Walker.

Emery Walker was another leading Arts and Crafts figure affiliated with William Morris. When Morris attended a talk given by Walker in the 1870s, he apparently felt as if all his frustrations and ideas regarding contemporary printing had been given a voice – so much so that the spark kindled by their meeting gave rise to the establishment of Morris’ Kelmscott Press in 1891.

By 1909 there was no love lost between Walker and Cobden Sanderson and they fell into a bitter dispute resulting in the dissolution of their partnership. Cobden Sanderson continued to run Doves Press until 1916, but never came to terms with the fact that their parting agreement decreed that ownership of the typeface would go to Walker on Cobden Sanderson’s death. With that event coming ever closer, at the age of 76 he resolved not to let that happen and decided to destroy the type by throwing it into the Thames off Hammersmith Bridge. This was no mean feat, especially at his advanced age – it took him 170 trips to dispose of over 1 ton of type. Clearly not a rash decision made in haste.

Fast forward 100 years, and the Doves Press type continues its obsessive hold – in 2010 designer Robert Green became fascinated with the story and the typeface at its heart, and not only began a process of digital recreation, but also set out to recover the individual pieces of type from the banks of the Thames – to date he has recovered 150 pieces.

Our exhibition charts the connections between these private press luminaries and Hilary Pepler’s Ditchling Press. Hilary Pepler moved to Hammersmith in the early 1900s and met a kindred spirit in another recent arrival, Eric Gill. They struck up friendships with Walker, Cobden Sanderson and William Morris’ daughter, as well as Gill’s old friend Edward Johnston. A couple of decades on, Pepler and Gill were also destined to part ways, although fortunately for us the tools of their trade remained intact – you can view Pepler’s Stanhope Press in the museum, and our exhibition features books and prints from Kelmscott Press, Doves Press and Ditchling Press.

If you’d like to find out more about Doves type, watch this fascinating short film with BBC journalist Tom Beal interviewing Robert Green.